Project Description: In the Truth of War Project we looked deeper into the Vietnam War. Starting the project off we looked at communism vs capitalism and the background of the war. Once we had a gist on the Vietnam war we looked at the timeline of some of the major events going on while the Vietnam War was going on. Though one of the biggest parts of this project was the Gulf of Tonkin Incident. This part of the project was big because not only was it a big part during the Vietnam War, but also a big point to learn and know the real truth behind Tonkin. So with this we looked at 9 sources from the Tonkin incident and studied them as best we could using our historical thinking skills. once we had a strong opinion on what happened in the Tonkin Gulf we wrote an essay explaining our reasoning. Also while this was going on we were working on getting an interview with a war veteran. This was another big part of this project.

The Storycorps Military Voices Initiative: The Storycorps Military Voices Initiative is a platform where Veterans returning from war have a place to share their stories. For my interview my group and I interviewed a Vietnam veteran. I feel the best/most exciting part of the interview was getting to hear what it was like being a military policeman. One thing I learned about the truth of war during my interview was how a lot of what you hear about war is a lot different then actually there. I feel the most challenging part was having an interview that is long enough. As the interview started we were flying through questions and I started to worry if the interview would be long enough. Though in the end some questions he really liked and made the question a good talking point. This made the interview a perfect length.

The Things They Carried Socratic Seminar: Though I was not in the Socratic Seminar I did indeed read the book that went along with it The Things They Carried. This book was a bunch of stories written by a man named Tim O’Brien. It focuses on what a true story really is. While reading Tim O'Brien's book there were many areas where I found things that are true in war. One thing that caught my eye was how a lot of the soldiers needed to tell their stories. Rat Kiley, Norman Bowker etc. All these soldiers saw sharing their stories as a big part during and after the war was going on. This is one thing that is true in war.

Writing a True History of the Gulf of Tonkin Incident: For our Gulf of Tonkin essay we looked and studied many sources ranging from President Lyndon B. Johnson, Henry Cabot Lodge, North Vietnam, The captain of the U.S Maddox, and the U.S Congress. We looked at these documents trying to determine the truth behind the Tonkin Incident. While looking at these documents we used the historical thinking skills: Sourcing, Contextualization, Close Reading, Background Knowledge, Reading the Silences, and Corroboration. While applying these skills to these primary sources I was able to see truths in war like how we used the attack to propel ourselves (The U.S.) into war with Vietnam.

Take-Aways and Enduring Understandings: While working through this project one of our main questions was, what is the truth of war? When you think about truths of war you think fighting, blood, death etc. Though these aren’t the only truths of war. Like I said above, for soldiers sharing stories could be a truth. For my Veteran that I interviewed one of his truths was that he had to do some things he never wanted to do, and that a large part of what happened i n Vietnam had to do with politics.. There are many of places that I found these truths. Like I said, the veteran that I interviewed, books like The Things They Carried etc. I believe that we can find conflicting truths like the Tonkin Incident by simply using the historical thinking skills above. Above when I talked about my paper and research I had to use these skills a lot, this was so I was able to have a good understanding of this incident and be able to find the truth. Without truths in war we would never be able to know how to prevent them. This is why I think that finding truths in war, such as Vietnam is important. If we are able to find these truths than we can possibly prevent even more wars from starting. While finding these truths one big thing I took away was that not only was I really interested in history and war, but that because of all the knowledge that I had learned about Vietnam I was easily able to look at these sources and find truths, and then apply them to my paper.

Artist Statement: The Cost of War
Pencil Drawing on Paper

In this drawing, I show how money isn’t the only cost of war and as a result, people die and families and friendships are broken apart. To express this I have drawn a soldier and the grave of a fallen friend, this drawing is in the United States National Cemetery. You can see this because of the American flag and the cross shaped gravestone. I decided to display my drawing here because it shows how the soldier was fighting for his country. I had the second soldier kneeling before the grave to express more emotion of how that soldier felt, showing he really cared for the man that had died fighting for his country. I feel that this piece of artwork really shows how more than money is at stake when war strikes, people's lives are also at stake. 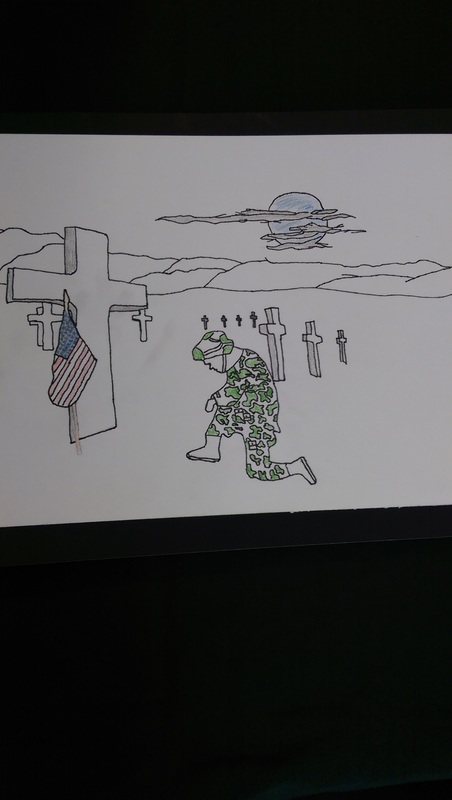